Sometimes you’ll need some given digital outputs for some given inputs in your project. At least I do. There are several ways to do this, but I will use the Karnaugh mapping method. 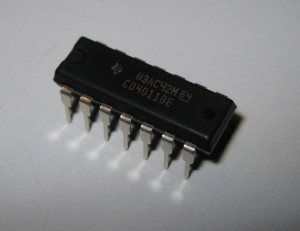 First let’s be familiar with some Boolean expression. If we have A and B as input of an AND gate, and the output will be C. Then the expression will be:
C = A·B

For an inverted signal I will put an underline (It should really be an overline, but since it’s easier to use underline, I will use that from now.) For an invert buffer it will be:
B = A

Let’s take an example. A H-bridge will take two inputs, direction and PWM-signal. We will have to convert those signals to the correct combination for the four MOSFET’s in the bridge. By doing this, we also assure that there will be no shoot-through, shorting the power supply by opening high side and low side at the same time.

We have the truth table:

Next step will be to map the two inputs as a Karnaugh map.

As you see we have to find groups or blocks of 1’s to get the simplest solution. If the block goes over a whole row or column, the result is the signal that do not change. If it say 0, it should be the NOT variant of that signal.

If the result is just a digit, its the AND of both signals.

If you have to use two blocks to get all, put a + sign in between.

You can read more about this on Google Books:

We have some NAND-equivalent for NOT, AND and OR gates like this:

Two NOT’s in serial will cancel each other out. It will then look like this:

Removing the two NOT’s in serial it will look like this:

Then we can put it all together to this: 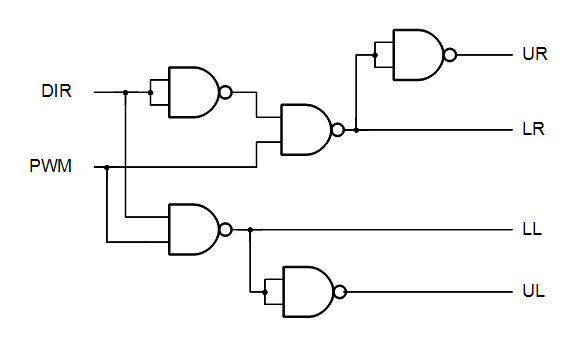 The actual H-bridge that I am designing, upper left (UL) and upper right (UR) uses an extra MOSFET for driving the H’bridge’s FET’s. This will cause an extra inverse operation on the signal from the logic to the FET’s. We then don’t need the signals UL and UR, but instead we’ll need UL and UR, wich is actual LL and LR

The total simple schematic will then be: 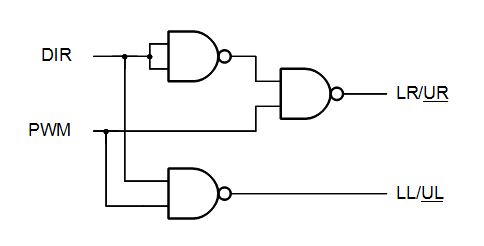 Complete H-bridge design will follow in some future blog entry.

This entry was posted in Design and simulation. Bookmark the permalink.

You can find out more about which cookies we are using or switch them off in settings.

This website uses cookies so that we can provide you with the best user experience possible. Cookie information is stored in your browser and performs functions such as recognising you when you return to our website and helping our team to understand which sections of the website you find most interesting and useful.

Strictly Necessary Cookie should be enabled at all times so that we can save your preferences for cookie settings.

If you disable this cookie, we will not be able to save your preferences. This means that every time you visit this website you will need to enable or disable cookies again.